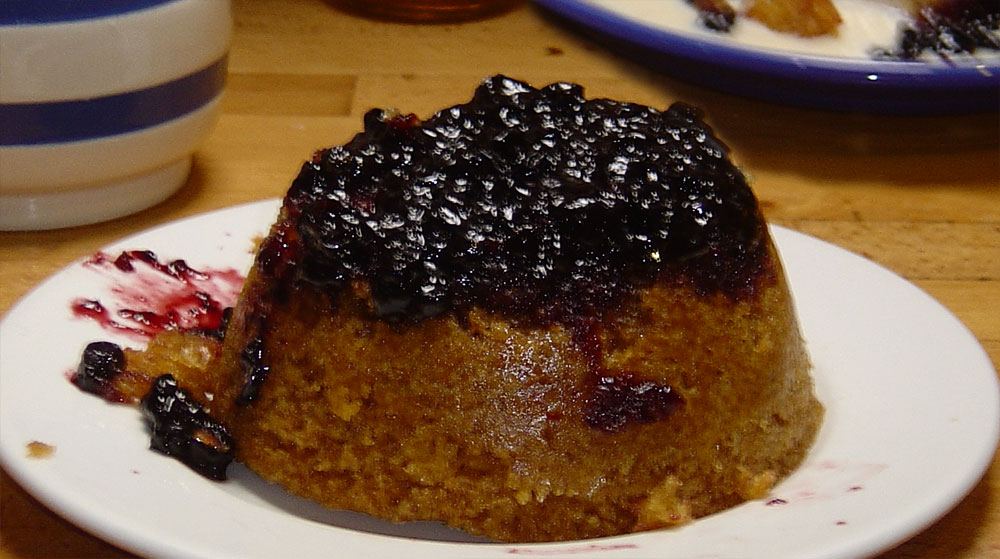 After sitting through Great British Bake Off’s pudding week it seemed there was only one course of action – get ourselves some steamed pudding!

The bakers had the task of creating a steamed pudding like what we all had at school, and it was mouth-watering. Of course, we never had anything as exotic as mango or tonka beans at school, but for me the main memory was not school at all but my mums basic but delicious treacle pudding with custard made with good old Bird’s custard powder.

So off we went to Morrisons to get ourselves a steamed pudding – one of those things in a tin. Who needs mangos and tonka beans?

As it turns out mangos and tonka beans would have really helped. I realise that treacle pudding from a tin (technically syrup sponge pudding I think) and custard from a tin could never match the dizzy heights of either Bake Off’s cooking geniuses or my mums no-nonsense full-flavoured family fare, but the disappointment was crushing. The pudding was stodgy, lacking in flavour and relying on the sugar hit of the golden syrup to have any sort of effect at all. The tinned custard did little to help – somehow over sweet but bland at the same time. We dutifully ate it, but with hearts as heavy as the pudding itself.

Caerthan at this point would have given it up as a bad job, but I decided the time had come to pull my finger out and have a go at making a steamed pudding myself. It had to happen, even though I had never consciously considered doing it before that point. Why else had I acquired mum’s pudding basins, waiting patiently in the cupboard to see the light of day once more?

One week later … I pulled up a few recipes and set about it with determination, not realising how totally EASY the whole thing is! I should have done this years ago!! My tooth is not as sweet these days so I didn’t reach for the golden syrup, instead opting for my home-made blackcurrant jam, for which I use a lot less sugar – so technically not jam at all really, but sharp and VERY blackcurranty.  The only tricky bit was tying the string for which I would have liked a couple more hands …

As for the custard – there it was was lurking on a back shelf – a tin of Birds. I tried to not think about the expiry date. Now, I have made perfectly serviceable custard in the past – bung in the custard powder, bung in the sugar, mix it with a little milk etc etc. Just like my mum would have done, making sure that was plenty of custard powder and plenty of sugar. But again, in deference to my slightly less sweet tooth I thought I would follow the instructions on the tin. Not a good move. It came out thin and wasn’t even yellow. Caerthan was rather generous: “It’s fine. We’ll call it Creme Anglaise”, but all I could hear was Prue Leith’s cutting comment: “That’s not custard – that’s a big mistake”. And my mum would have agreed.

But the pudding … Delicious! The sponge was light and open and the topping sweet sharp and fruity. It hit the spot and although it wouldn’t have earned me Star Baker, or even a Hollywood Handshake I reckon my mum would have been impressed.

Great British Bake Off – thanks for the inspiration!

I'll notify you by email when I add a new piece of music or video to the site - maximum of 1 email per month. That's all - your details won't be used for anything else.

My hope is that my music will be heard and enjoyed.
You are welcome to download any tracks and keep for your own personal listening.
If you want to share the music with your friends, I would prefer it if you referred them to this site, so that they can read this policy for themselves, and then download. If they're not online, of course, feel free to share in anyway that is appropriate.
If you want to use the music for any purposes other than your own personal listening, please ask permission first. Unless it is something horribly unethical I'll more than likely feel flattered and say "yes - give me a credit and link if possible". If it's a commercial venture then I might ask for some money.
On the subject of money, if you want to help out anyway, you can use the 'Buy Me A Coffee' button below. It's not a request - just an option if you want to, that would be very much appreciated!